I had a burst of creativity today!  I had a project that was weighing me down creatively, but I finished it. As a result, I am very much ready to play in my crafty space.

Here is the graphic for Fusion, the title is Saint Paddy's Day.  But I took a different turn with it. 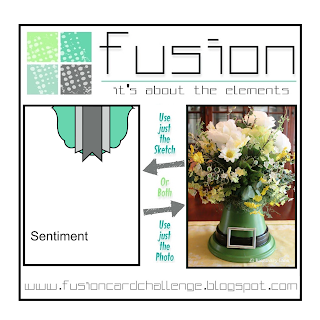 I was very much influenced by the white and yellow flowers, as well as the abundant greenery.

I'm working my way through my bin of un-inked stamps and decided to play with WPlus 9's rose builder.  For a layering stamp it is fairly easy to use.  I stamped three of the layers for the big rose, using the same ink color on the two biggest layers, I simply stamped it 4 times for the second layer.  I used two colors for the smaller rose along with two of the three stamps. Along with the stamps, I used the cut and stamp set from SSS/HA Prayers, and an embossing folder from Stampin Up.  Inks for the roses were HA Soft Granite and SSS Fog for the grays; SSS Duckling and HA Soft Vanilla. 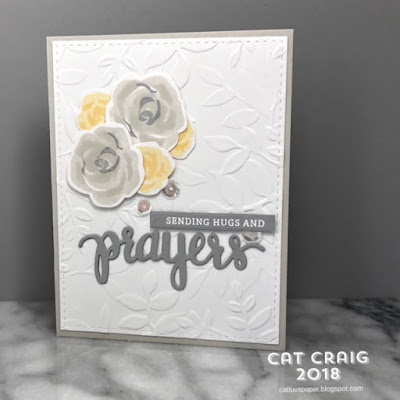 Thanks much for stopping by!

Absolutely gorgeous card, Cat! The embossing folder in the background is the perfect element for those roses! Off to see if I can make something as I finished one house chore today & need a reward!

This is such a GORGEOUS take on the challenge, Cat! Your roses are beautiful and I love how you added texture with your embossed background! Love your color palette, too! I'm so glad you played along with us this week at Fusion...we always enjoy seeing your creations in the gallery!

This is so beautiful.

oh YUM!!! what a great version of the fusion challenge and just all round excellent in every way for that matter!!! (pretty sure i NEED that e/f stat...) :)

Beautiful soft card, love the embossing as a backdrop and I like the subtle tones - very pretty x

Cat this is a beautiful cards, love those soft grey flowers!

This is so lovely. The embossed background is perfect for bouquet of flowers. Love the soft colors too! Thanks for joining us at Fusion!