I was able to play in another Hero Arts Scramble at their flickr gourp.  Our hostess was Theresa and her  theme was floral with stripes/plaids/checks.

I knew exactly what I wanted to do, and my card in reality is fairly close to my vision in my head...that rarely happens!

I used the Hero Arts Brushstrokes set to create some "lines" on my card background. Then  I Stamped Hero Arts Night and Day Flowers on top of the dried inks.  Next I used Impression Obsessions thin lines background stamp to add some tone on tone lines to my card base.   Then disaster struck! I had about 20 minutes left of the 90 allotted.

I only wanted to use part of the flower panel, so I trimmed it.  I have to say I didn't take just a bit off and then more and more...no I whacked a whole bunch off the right side and  less off the left.  I wanted the brush strokes to be edge to edge. I added a bit of glitter paper on the left side and mounted my flower panel...ugh...too much card base was visible on the right and I hadn't put a sentiment down yet!

So I grabbed my cut scraps, and trimmed them. I cut thin pieces of black card to look as if there was another layer.  Then I just added the re-trimmed inked pieces to the card front with a bit of black edging.  My foam dots were very cooperative and allowed my Hello to stamp cleanly even though it was not a flat surface.  Lastly a few blush colored gems and YEA the card was saved! 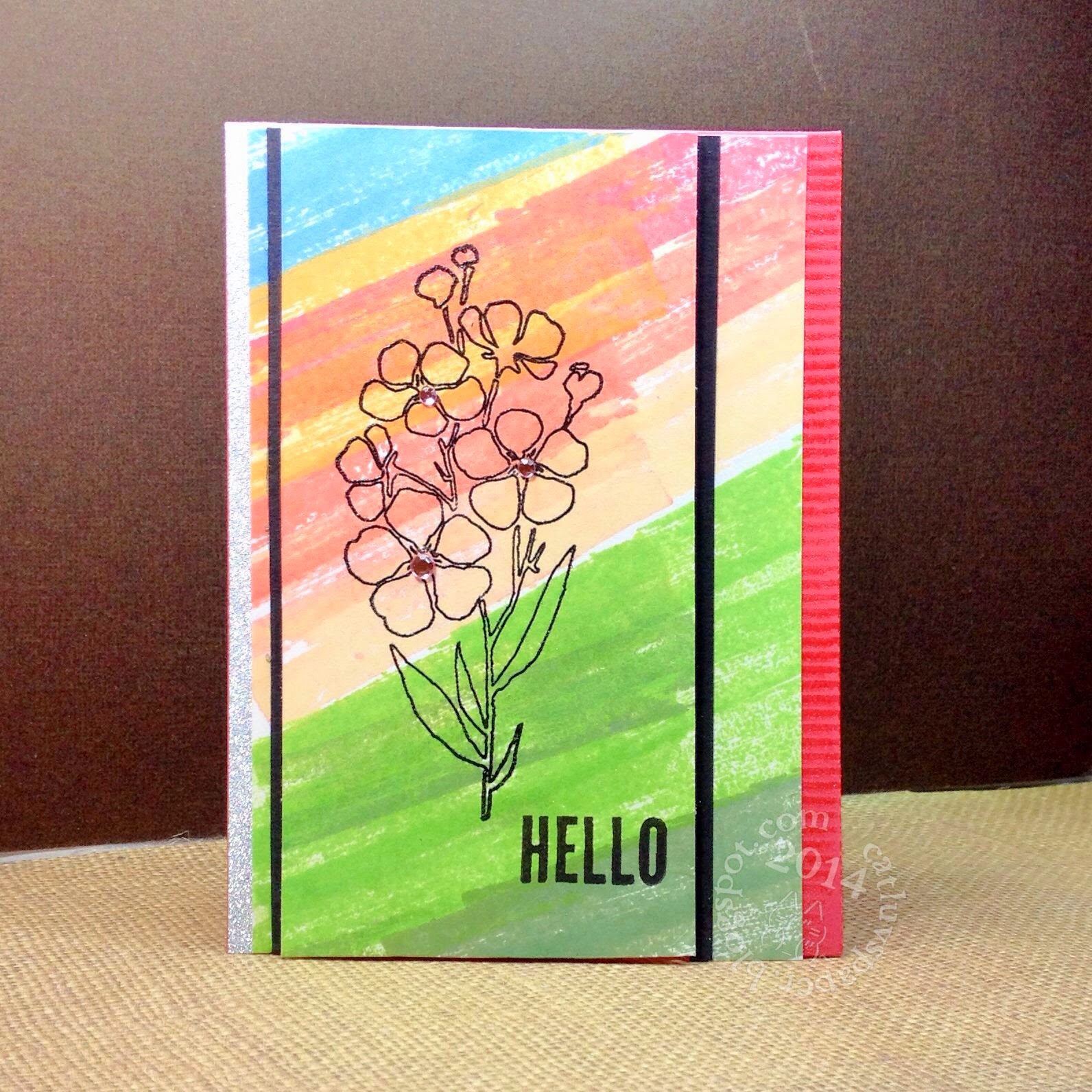 I really love this card, and I'm so impressed with how you resolved the issue with your background...very clever! The flowers are so pretty with all the different colors, and the Brushstrokes look amazing on an angle! Beautiful card, Cat!

WOW, this card is original and marvelous.Sometimes accidents are the best form of creativity. Just love how this turned out.

Great save, Cat, as you ended up with a wonderful card! Thanks again for the nudge to participate in the scramble.

Ya know, I have that brushstrokes set, but it gives me real strokes when I try to use it. Now i"ll have to try what you did with the stripes. Super card!

And sorry to read you trim like I do. So so sorry.

This turned out to be fab!!!! Loving those bright inks :)