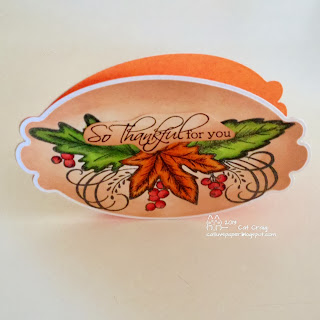 A rather odd aspect on this photograph.  This card was very hard to photograph, this was the best I could come up with.  The stamp is from Heartfelt Creations. I colored it with Copic's then die cut it with a Spellbinder's die. It was inked with distress ink.  I admit to putting that sentiment on a separate piece of paper because I did not want to ruin the original card trying to stamp a rubber stamp in the exact right space on the card...had I been in Maryland with my stamp positioner...I probably would have stamped it on the card face.

It turned out beautifully, Cat! Love the wonderful shape and pretty colors!

Beautiful, Cat! Love the beautiful coloring and the shape of it!

This is FABULOUS, Cat! I love the shape & the beautiful coloring!

Beautifully colored, Cat! I love that Nestie used as a card base.