First off Jennifer McGuire made a lovely bright card over pencil marks, then muted the card with a double layer of sentiment embossed vellum. I chose a color combination that included orange, purple, white, mint, and raspberry. Right up my bright color loving alley. I have to admit this one is my favorite of the three. Inks were HA Shadow inks in Orange Soda, Neon Purple, Mint Julep, Raspberry Jam, also Versamark for embossing silver HA embossing powder. Stamps were Stampin Up Mixed Bunch, Perfectly Penned, WPlus9 Fresh Florals and AC Cardstock, JoAnn Vellum. 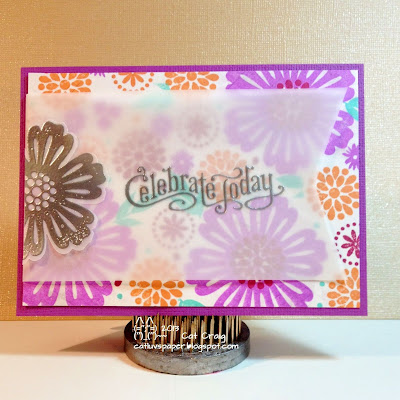 Next up was Kristina Werner's card. It is so totally cool. My execution did not reach her level of coolness.  Hubs made fun of my flower calling it a misshapen orange.  Lol. Kristina used a round circle opening, I tried it using a flower shape just for something different.  There is a reason hers looks so good. I used the colors combos of dk blue, red, mint, purple, and white. The white base is embossed, as is the acetate panel.  Stamps used are from WPlus9 Fresh Florals, Stampin UP Punch, Lifestyle crafts whimsey embossing folder, Cuttlebug swiss dots embossing folder, sew easy bakers twine, Stampin Up framelit, MS pearl, AC Cardstocks, White HA embossing, and versamark embossing ink. 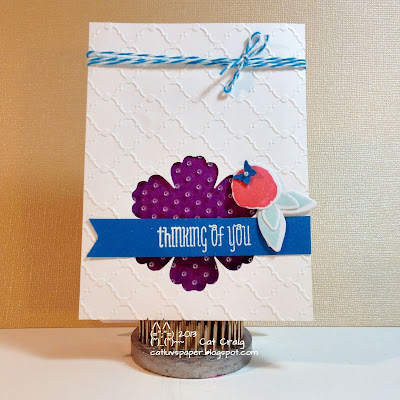 The last of the three was inspired by Cristina Kowalczyk's card. I used the color grouping including ivory, pink, light pool, peach, and gray. I had a Stampin Up set which had a border stamp that was a string of pennants.  I stamped it using HA Charcoal, I masked off the sentiment to finish up the stamping. I matted the card on gray card because I like the border around the card. Our class card did not have the border. I used Stampin Up's Designer Typeset, Hero Arts Sentiment LP237, and Spectrum Noir markers in OR1, PP3, BT2. Papers AC Cardstock.  Some unknown rhinestones that were separated from their packaging. 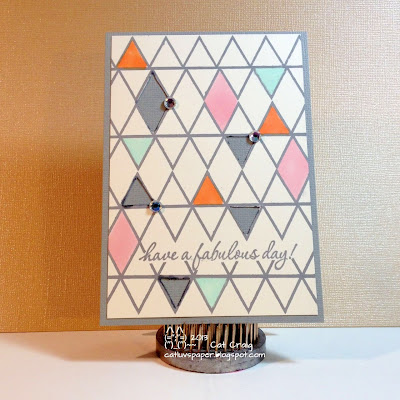 I have decided I need a new exacto/craft knife after cutting out the spaces on this card...which ones do you use/favor? Suggestions please.

I think your cards did reach a level of coolness. I like the window card, that flower opening is clever.

Beautiful takes on the class examples! I'm falling behind now... only 2 cards made for Week One!

Wow, to pick one? Well, I'd say the one in the middle really stands out. Those color combinations are awesome -- something I'd never have tried (until seeing this). The purple really stands out. Your entire group of cards today shows you worked hard and created some beautiful cards--all three are great!

WOW! what awesome cards! Looks like you're really enjoying your class! I really like the triangle one IF I had to pick! Sorry I can't recommend an exacto knife,mine is just the basic model from Micheal's and it hurts my hand:(

These are very cute!

LOVE that 1st one with the bright stamping! You're so good to keep up with the homework :)

Love all three cards Cat! My favorite is the last one. I love how you cut out the space!