Happy Birthday and a break

Just a quick note that I am going to take a break again...and I'll be back in September.

I was irritated after making this card, and I was not going to share it.  Its been sent off so I cannot re-photograph it in my usual square style.  But I have come to like the card and I thought I would share it and how this design came to be. 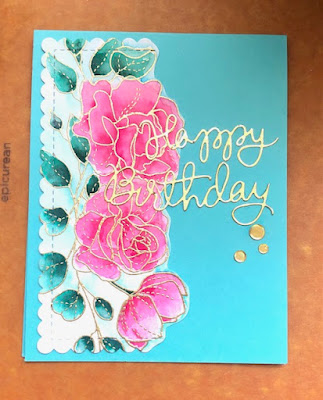 I had colored this image; after it dried I went to cut it with the scalloped border die. I did it from the blind side of my vagabond - meaning I plopped it down on the cutting plate and placed the second cutting plate on top of it without examining everything as it was on the far side of the rollers not the near side I generally use.  Unfortunately, I had a word die that was stuck to one of the cutting plates and it ended up cutting into the panel inside the scalloped edges.

Too much time was spend coloring this, so I had to come up with some creative fixing. I cut around the image chose a card base that matched the leaves somewhat and added the gold sentiment and a few gold sequins.  I think it works.

How do you think I did?

Great save, Cat! I love the bright happy colors, and would never have guessed there was a boo-boo involved. Enjoy your break!

What a pretty card with a fabulous colour combination. Great save Cat and the 'line' sentiment looks fabulous along with the 'line' edging of the beautiful flowers and leaves. So glad you shared this and have a lovely break Cat x. Thank you so much for stopping by my blog and leaving such a kind and friendly comment.....I appreciate it x.

great fix, Cat and no one would have ever known unless you told us - and agree - too pretty not to save!

So beautifully colored, Cat - I would have been so sad if you hadn't saved it! You did great, my friend!
Have a wonderful break, and as the song goes: see you in September!
=]

A great save, Cat! In fact it's beautiful! The roses are gorgeous and I love the scalloped edge with the fussy cutting around the flowers on the opposite edge! I hope you enjoy your break!

I think the image and your coloring are both gorgeous and you pulled it from the fire with your brilliant save! It appears as though the sentiment is growing out of it. Enjoy your break, Cat!

Great save, Cat! Your coloring definitely needed to be saved as it's beautiful! Enjoy your break, whatever you're doing! Stay safe, my friend. Hoping the envelope made it to you.

Oh no, I can imagine exactly how you felt when that happened. It is the sort of thing that happens to me, even when I think I am being careful. I am so glad you saved the day as if you hadn't told us we would never know and it is a super card. Really lovely and cheery. Enjoy your break, I hope you are doing something nice xx

Wonderful design!
Have a terrific break!

So beautiful, Cat - it was meant to be!!

Perfect save, Cat! It's pretty from my view!